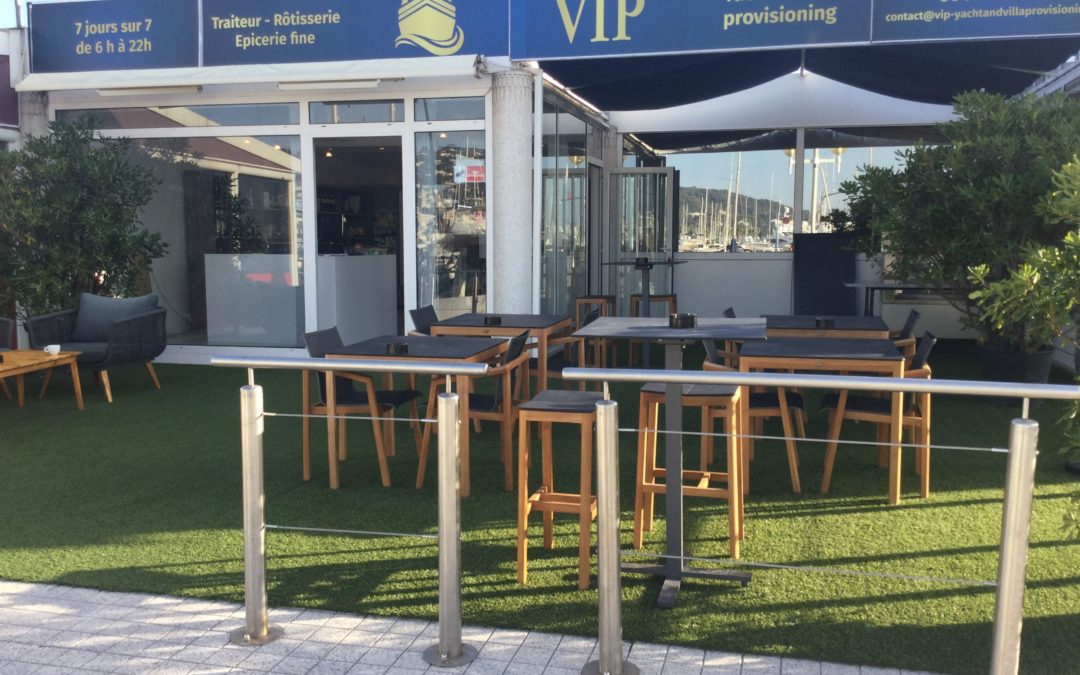 The brand new shop that Stéphane Colletin and Sophia Martin opened 2 months ago attracts a large number of connoisseurs of fine taste.
It is not a new restaurant but rather an upscale grocery store coupled with a kitchen where Stéphane is preparing his orders with sophistication.

This professional Chef from Aix-en-Provence, who worked for the best tables throughout the world since he was 15 years old, was seriously thinking of creating his own business. Stephane was chef in a brasserie and for private clients in Saint Tropez before he had the idea to start provisioning yachts when he was in Saint- Martin in the Caribbean. After the departure of his business partner in this project, his partner in life, Sophia, who has a master’s degree in international business, joined him to create “their own business”. Sophia has spent 9 years in the United Sates and is familiar with the Communication and contact with the clientele, plus she loves cooking … so they’re good to go!

Willing to work in a comfortable area, Stéphane and Sophia initially settled in Saint-Tropez. It is in the small town of the “Bailli de Suffren” that Stéphane started working as a private chef, so he knows a lot of people there. “When I started as a private chef, I used to go every morning and sometimes several times a day to the local producers of the market; with the traffic it became complicated so I installed fridges in my garage to stop running around and have all products on hand”

While Stéphane delighted the customers of the restaurants of Saint-Tropez, his partner Sophia, from Guadeloupe, was studying international business before crossing the Atlantic and learn the American practices. “A way of communication mode very different from ours”. She uses the very efficient US methods and ” I recognize that she is right ” says Stephane, clearly relieved to leave this task to his partner. Sophia also manages the shop and the deliveries and lend a hand in the kitchen as she admits her love for cooking.

The rentals are unaffordable in the area of Saint Tropez for their budget and some happy coincidence led them to the port Camille Rayon. “I was driving back from the Monaco Yacht show on the sea road”. This pleasant itinerary took him to the port Camille Rayon where he decided to stop. He fell in love with the place like Sophia, on a second visit. Moreover, a commercial space was vacant, close to the “Théâtre de la Mer” and perfectly adapted to their needs. But the owners are looking to sale when Sophia and Stephane want to rent ,for now. Thanks to Sophia’s pugnacity, and after 7 return trips between Aix and Golfe-Juan, they obtain satisfaction and a sub-lease contract. “We intend to stay and maybe buy later on, if possible” says Sophia.

For now, the managers of VIP “Yacht and villa provisioning” are already quite busy as boaters and actors of the port appreciate their innovative offer.

In a very near future, the duo will become trio as a baby Jade is expected for February 2019, and she will also be a very present actress of the port. “Everything is planned” say the future parents who have many projects to develop their concept “provisioning” in addition to the takeaway breakfast and gourmets’s basket.

After the birth of Jade, Sophia and Stéphane will engage redesigning work as they want to add a catering service area open to everyone.